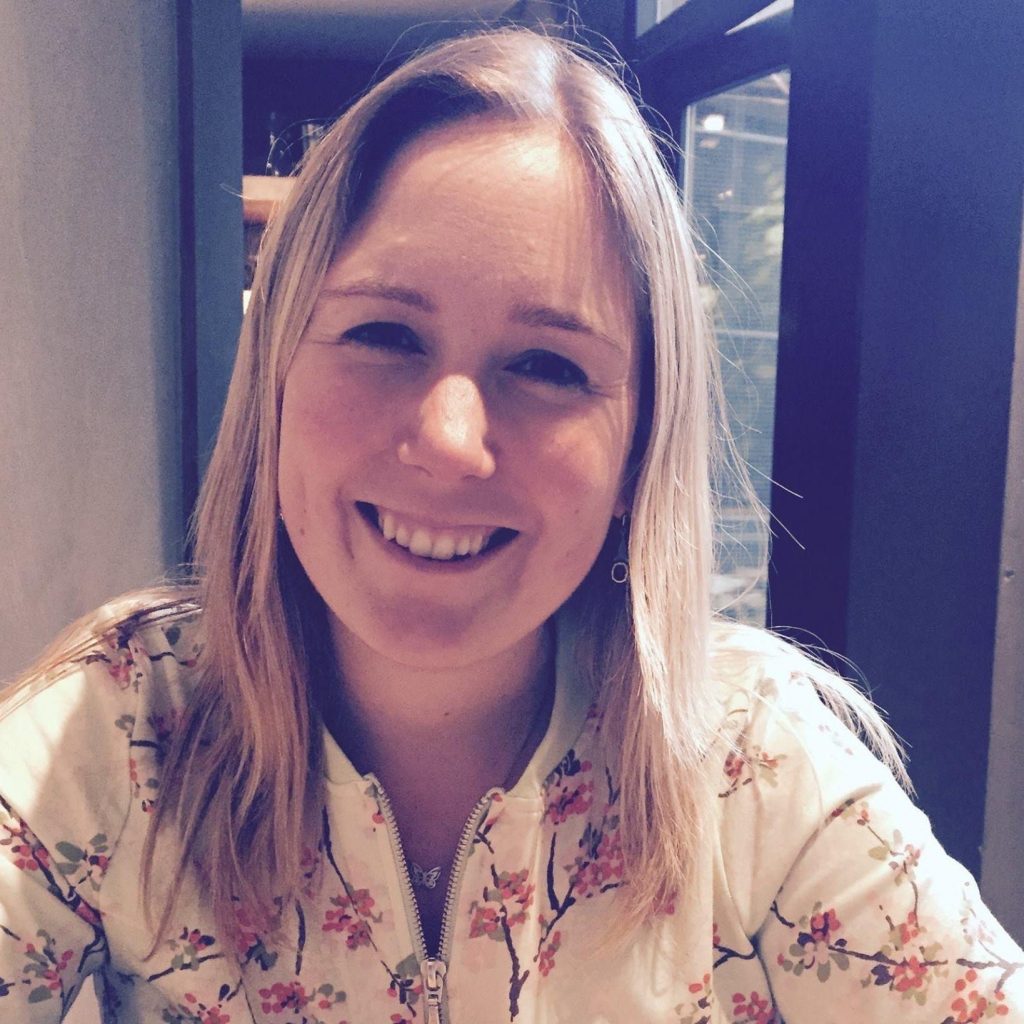 Annemieke lives in Weesp and has two children. She is currently working at Wunderman Thompson, which is a creative agency, consultancy and technology company. Next to this she likes to keep herself busy with all kinds of creative things like making things together with her children.

Annemieke was part of the first group of IDE students of the UT. She had already finished one year of Civil Engineering when she transferred over to Industrial Design the next year. She made this choice because Civil Engineering was not creative enough for her. In the end she did the master Design and Styling,

which was one of the available master tracks back then. At this time the whole study was naturally very new, so it was even more broad then it is now.

At the time she was working on her thesis she was using an outlook agenda, which in her opinion didn’t work optimally.
So she designed a digital notebook with apps on it on which she kept her notes and appointments. In this way she created a very visual, digital agenda. This worked similar to the iPhone agendas right now.
Because of this, her interest in UI design grew vastly, which we will find out more about later.

She did her graduation internship at a design agency in Den Haag, Spirit, which does not exist anymore. This company was the developer of the Secrid miniwallets, a product which, by now, we have probably all heard of. Only years later, after Annemieke had already left the company, the Secrid

miniwallet became successful and developed to how we know it today.
While working at this company, Annemiekes main occupation was to visit other companies and show them what the agency could offer them. Next to that she also designed bags and packages for Sitecom routers. But when their biggest client, Maxi Cosi, decided to start designing for themselves, the agency more or less collapsed and Annemieke chose to leave.
She then started working at a start-up, Mobihealth. They had developed an app and they asked her to design a nice interface for it. At the time she worked three days in a week, because she was working on a PhD at the University at the same time. Unfortunately this was very hard to combine, so she did not finish the PhD. It is still on her list though!
While working at Mobihealth she got more and more into UI/UX design and this got the attention of Eperium (which was bought by Wunderman Thompson later on). Initially the company was not entirely sure about hiring her, because while she had the right background, she did not yet have the experience they were looking for. But after having a beer on a terrace with someone from the company, they hired her anyway. The experience that she needed, she could gain from her colleague.
Initially the companies main occupation was building websites for other companies. Annemieke got to know two ways of working, waterfall and agile. Waterfall means that all requirements are set at the start and are then worked out in one go. Agile means that everything goes little by little. With agile it is way easier to react to unexpected things you come across on the way, although it is harder to keep the total overview. Therefore they evolved into a method in which you do have an idea of the result and then implement this in parts. This works well with testing too, because you can do some tweaking inbetween. She developed such a fondness for this method (Scrum) that she decided to develop a scrum training to teach this way of working to the rest of the company. This drive to be able to work together with everyone came from the study. As an IDE’er you have the capabilities to be the translator between multiple disciplines. This comes in handy while companies work with a lot of different disciplines, countries and cultures. Other aspects of the study she often uses for her work are being able to get out of your comfort zone and think out of the box, design sketching and design for specific users.

As mentioned before the study Industrial Design back then was brand new, so a lot of things had still to be tried out.  This caused some courses to be way too hard, while others were too easy. Annemieke had some trouble with the programming in Java, but she always really enjoyed the prototype making. Meanwhile she has discovered that knowing how to use SolidWorks is quite a valuable skill. She liked SolidWorks during the study, but always found it pretty complicated. She wished she would have tried a bit harder with SolidWorks back then, that would have come in handy right now.
She always experienced it positively that the study is so broad, even though she knows not everyone shares that opinion.

During the founding of Daedalus she doubted whether she would join the first board or not. But she was already active at Audentis at the time, so she decided not to. At first she was actually anti-student associations. But because the year she did Civil Engineering consisted of 90 boys and only 10 girls, she joined a do-group which had other girls. This was an Audentis do-group.
She was also active within Daedalus in a couple of committees like Excom. After a while she also started a new fraternity at Audentis. Just like the founding of IDE and Daedalus, this was also a new beginning. She says this kinda is the red thread of her life.
She also worked at the Study Informationcentre at the time. This was run entirely by students. They would attend study shows and represent the UT. At the UT a whole lot is done by the students themselves, that’s what she likes so much about the UT. All the things you do next to your study is exactly what you learn a lot from according to Annemieke.

She looks back positively on her study time. She says that most people think that when you have finished studying you are ready for real life, but this is not exactly the case. You still have to find your way, wherever you go. She would have liked it if the study would have focused some more on how to find a job that fits you, because a lot of people struggle with this.

She really enjoyed working in groups, unless it was a group that could not work together well. But this is something you have to learn as well, she says. You will probably encounter this in your job sometime as well.
The relationship between the students and teachers was very informal. There were only about 30 students in Industrial Design at the time, which was okay since they only had one room in the Horst Tower in which they had to do everything.

She found discovering new ideas and experimenting with them the nicest aspect of the study. During her study, she developed the idea of the Wii with some fellow students before the Wii was even a thing. Their reasoning was that if you could control the tv from a distance with a remote that this should also be possible in a game by use of a sensor. Everyone at the study had his or her own strength and combining these produced nice results.

She says that she learned a lot about politics after finishing her study, but she also learned that nobody really knows what they are doing. This is not always a bad thing though, while everything you do has value. Her best tip is to learn as much from each other as you can. In a study as IDE, everyone has their own strength, but you should actually pick up tasks which you are not as good at yet. Maybe even ask someone else who ís good at it to work on it together. In this way you can keep developing yourself.